Between You and Me, There's PR 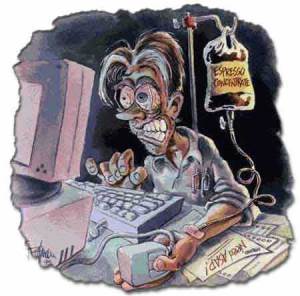 I remember applying to college and finding out I was accepted, via email, just a few days later. I was disappointed. I had watched the college acceptance process on TV shows and in movies and assumed I would wait in agony for weeks until a bulky or thin letter from the university determining my fate would arrive. Instead, a simple congratulatory email, discovered after school in the journalism room, was all I received. I didn’t even get a chance to hold my breathe before opening it!

Then, I was disappointed in the speed of information because I felt like it degraded my value- as though nothing about my history was being considered. Now, I thrive on this fast-paced delivery of information and drain my battery before the day ends by simply checking email, Facebook and Twitter.

The good news is, my obsession for knowledge is not isolated. 48 percent of people between the ages of 18 and 34 check Facebook when they wake up in the morning and 28 percent before they get out of bed (guilty!). Is the increased speed of information flow dangerous or a positive change?

For me, it can be stressful and overwhelming. It’s the worst for me when I know an important email is coming, but not when. I assume this is what it was like for students applying for college in the olden days (you know, a few years ago), only worse because we are used to having information at the exact time we want it.

Three years ago, I successfully gave up Facebook for Lent. Could I do that today? Then, I was a sophomore in college so Facebook really only served as a distraction from homework. Since then, Facebook created groups and chat, which was imperative to many group projects. In fact, one day I had to park so far away from my multi-media journalism class that I went to a different computer lab and worked with my group members through our Facebook group instead of wasting 15 minutes walking to class. Even now, as a hopeful PR girl whose future career will most likely involve the use of Facebook on a daily basis, the thought of not having access to social media or the Internet seems impossible.

To step away from the information and technology is not an easy thing to do these days. Because the news is readily at your fingertips, you are expected to be more knowledgeable about the world around you-which, don’t get me wrong, is a great expectation. The challenge comes when we attempt to find a balance between information overload and general knowledge.

Evaluating and separating information we need or want to know from information that is just occupying space helps  to better utilize our time. Logging on to Facebook or Twitter just because  you are bored or to check up/creep on old classmates is not a good habit to practice. We should live in harmony with information, rather than letting it dominate us.

I 100 percent believe in the power of social media and its use for information flow, but sometimes I have to scold myself for checking my phone apps instead of enjoying the life around me. Information is an addiction and accepting it is the first step- Yes, I’m poking fun a little. But seriously, here’s some tips to keep in mind nonetheless. Read Responsibly.

I’m not a big politics person, so the purpose of this post being several days after the midterm election is because I find the election period overwhelming. There are endless advertisements everywhere, including social media.

As I jumped on Twitter Tuesday night I was welcomed by a seemingly endless stream of election results. I follow several local and national affiliates, however the three dominating the election talk on my Twitter feed were the Wall Street Journal, New York Times and NPR.

Because I didn’t stay on for long I didn’t notice any specific trends, however, apparently this round of elections was revolutionary for both Twitter and the news media!Even Twitter wrote a story about how impressed they were with the success of Twitter usage for election related news.

The New York Times attempted to stand out by utilizing a visualization of the conversations occurring on Twitter as well as a streamline of tweets. The Senate races starting October 21 and ending on election day can be seen here, but below is a static picture of the visualization. 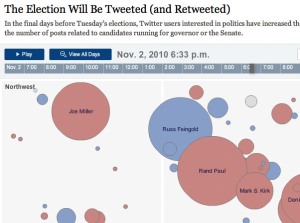 CNN also created a visual using the tweets directed at monitoring the conversations on Twitter. For instance, CNN posted several different maps of what people were talking about. One compilation answered the question, “Why are you voting” but it was not a poll or a direct question, just simply what people were tweeting about. They also used this same visual on CNN television. What a great analysis of the election’s presence on Twitter!

Lastly, the Washington Post did something no one had ever done before as well. They became the first organization to buy one of Twitter’s “promoted  trends.” This looks just like a normal tweet, but it notes that it has been paid for by an advertiser. When anyone used the hashtag #elections, it would promote the Washington post first. According to a post-election article measuring the success of this promotion, the Washington Post said it was successful in driving traffic to the paper’s website but that their main purpose was to just be at the center of the conversation.

The innovative ways in which these organizations used social media to engage with the audience though analysis and conversation proved they were accepting this new trend in resources for information.

While some people might still be in shock that many people rely on Yahoo or other online sources to receive their news, that is officially, for lack of better terms, old news.

The new trend is in social media and especially using Twitter as an outlet for delivering news. It is mobile, fast and it is here to stay. For these three news outlets to reach out to their audience in such a different way shows real progression.

Where do you get your news from?

//
window.onload = function ()
{
// don’t do any initialization if this file is not loaded in an iframe
if (window.location.href == window.parent.location.href) {
return;
}